My name is Robert Morphet. Welcome to my blog where I will update you on events during my year as District Governor in 2017/2018

The invitation to see the brand new and latest Yorkshire Air Ambulance (YAA) to the County on Tuesday 7th June was both a delight and an honour. The Rotary District Governor Hazel Haas and I were invited to represent all the individual Rotarians and the 79 clubs across Rotary District 1040 who have donated funds to the YAA over the last few years.

The venue for the event was the Nostell Air Support Unit, which is actually part of the Nostell Priory Estate, near Wakefield. The facility was apparently donated by Lord St Oswald and the ongoing lease is described as a ‘peppercorn rent’. 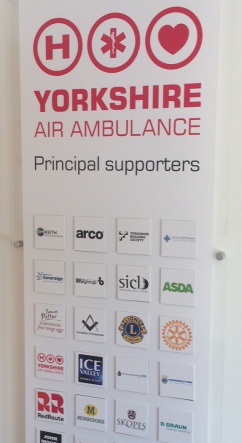 Rotary District 1040 – A Principal Supporter of the Yorkshire Air Ambulance

The Rotary emblem is prominently displayed along with 20 organisations in the YAA head quarters as a ‘Principle Supporter’ and the new Air Ambulance displays two Rotary logos, one on either side of the ‘clam shell’ doors at the back of the aircraft. Many Rotary clubs make individual donations directly to the YAA and unfortunately we don’t actually know the total benefit the Air Ambulance received during the last Rotary year. (A good example, if any were needed, for the database that is Rotary Club Central). 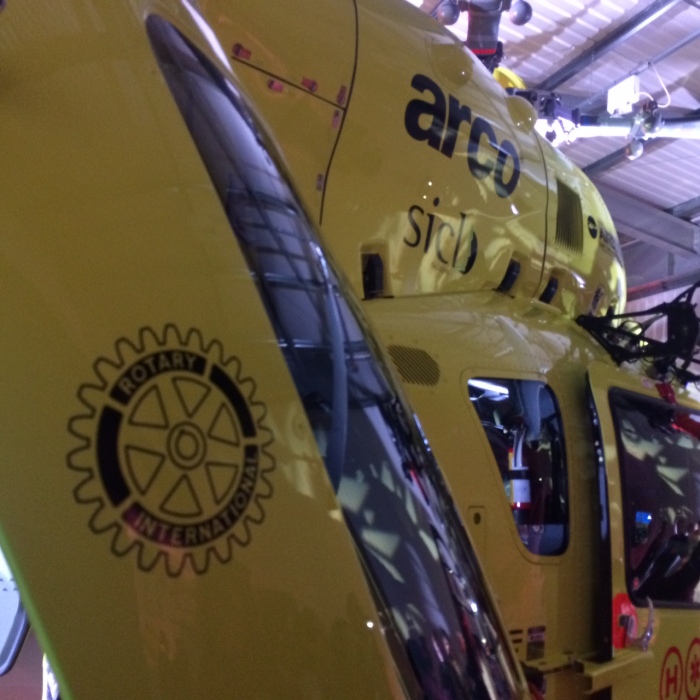 The YAA Chairman Peter Sunderland followed Brian Chapman’s welcome and introduction.  He said that each air ambulance is called out 3 or 4 times a day, every day of every week and that it is not part of the NHS. The £12,000 per day running costs are funded entirely from donations, from small individual donations to large corporate donors. Peter believes that the people of Yorkshire are very proud of the Air Ambulance service and they feel ‘a high degree of ownership’ towards the service. He was very pleased to report that the cost of administering the charity was just 15% of the total income, less than some other comparable services.

The Airbus H145 helicopter so proudly displayed was built to YAA exact specifications.  The helicopter was paid for in full and a major contribution towards the cost was from the government.  This contribution was made after Chancellor George Osborne received a letter from Geoffrey Boycott suggesting that a share of the fines levied against the Banks to go towards a new Air Ambulance in the County of Yorkshire. Peter Sunderland spoke of his amazement seeing the sum of £1m showing on the account via a BACS transfer from H.M. Government!

On seeing the new aircraft for the first time, one lady was heard to remark, “I wonder how many lives that will save?” The helicopter it will replace saved 4,893 lives and this number will continue to increase until the new aircraft is fitted out and brought into service later in the year (2016).

The new aircraft will have increased manoeuvrability due to an enclosed and protected tail fan, it has a top speed of 160 mph and can travel two hours thirty minutes without refuelling; over one hour longer than the current model.

The interior of the Air Ambulance

The new aircraft is larger than the current model with the benefit of being able to transfer through to the cabin and the treatment area. As well as the stretcher there are two forward facing seats at the side and one backward facing seat at the head end of the stretcher to facilitate life saving / sustaining treatment whilst in flight. Additional medical equipment will include cardiac machines and an incubating and ventilation system, all of which can be administered by qualified Doctors who are now part of the YAA team.

Looking Forward
It is an ambition of the YAA to be able to operate 24 hours a day, 7 days a week. Such a service will increase costs by some 30% and require additional equipment such as night vision helmets at a cost of £20,000 each (they require 9 helmets!). In addition, the four regional trauma centres; Middlesbrough, Hull, Sheffield and Leeds will have to be fully lit 24 hours a day, which is not currently the case.

The Yorkshire Air Ambulance covers 4 million square acres of Yorkshire and includes over 5 million people. 4.4 million of those are adults and if each adult paid just £1 each that would almost cover the annual running cost of one Air Ambulance.

The Yorkshire Air Ambulance is a remarkable service.  If you were that patient, if that person was your relative or if you were at the scene of an incident, it would give you tremendous reassurance when a helicopter appeared from out of the sky.  On board there will be a team of qualified and very professional caring people – who have just one primary objective;- to help save your life. 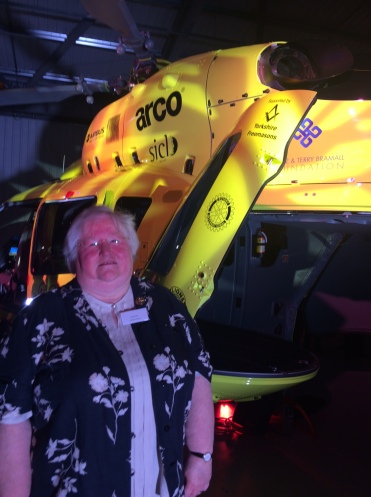